skip to main | skip to sidebar


DID ISRAEL STEAL THE FALAFEL FROM THE PALESTINIANS?
This seemingly silly question, is a precursor to an investigation into
the intentional and systematic hijacking and eradication of Palestinian cultural history, by the state of Israel.


To find out more about the residency and The Novel of Nonel and Vovel (Charta 2009) please go to http://nonelandvovel.net/falafel-road-residency/ 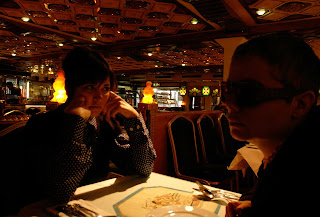 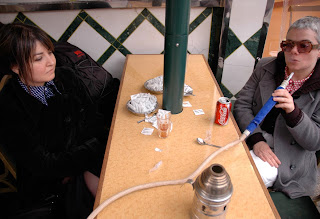 We created chapter 6 Orientalism for The Novel of Nonel and Vovel in London, Edgware Road, trying to work out how our relationships and the politics of the region pan across the spectrum of falafel.

Larissa's video Soup Over Bethlehem, and Oreet's video Why Do You Think I left? both feature immediate family members, can also be seen as precursors to this residency. 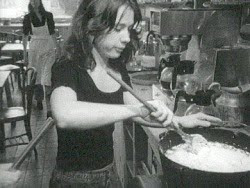 A still from Gordon Matta-Clark's Food

A big influence on this residency too is the restaurant project and film
Food
Gordon Matta-Clark
1972, 43 min, b&w, sound, 16 mm film on video
This film documents the legendary SoHo restaurant and artists' cooperative Food, which opened in 1971. Owned and operated by Caroline Goodden, Food was designed and built largely by Matta-Clark, who also organized art events and performances there. As a social space, meeting ground and ongoing art project for the emergent downtown artists' community, Food was a landmark that still resonates in the history and mythology of SoHo in the 1970s.
Camera and Sound: Robert Frank, Suzanne Harris, Gordon Matta-Clark, Danny Seymour. Editing: Roger Welch 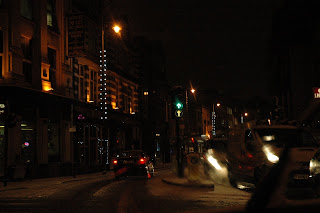 We went to map the Falafel Road on a snowy day, it was strange to investigate potential falafel locations in the snow, as it has associations with sunny weather. Mapping the locations was based on a number of factors: different types of eateries; cafes, restaurants, market stalls, health food shops - cheap and expensive, also we tried to spread outside the West and East End, we also tried to find Palestinian, Israeli/Jewish, Lebanese, Iraqi, Turkish, and other possible originators of the falafel. 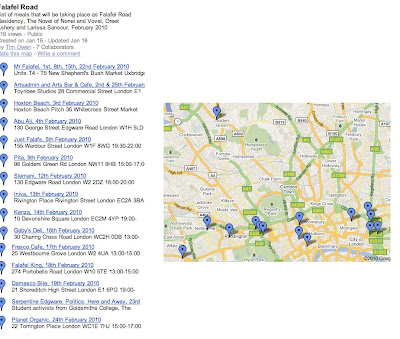 Apart from the usual 20 meals we have 4 larger meals/events:

3. Falafel Road at Thursdays@ Artsadmin, 25 February 2010. At the end of the residency Ashery and Sansour share the project in the form of an open studio event at the Arts Bar and Café, Toynbee Studios, where they will show footage from the residency 18:00-22:00

4. A falafel meal at the house of Margareta and Marcus in Hackney. 10th of February, at 19.30. Rayna Nadeem and Stuart Shahid Bamforth will present 'Life In Gaza' , A participatory film with young people in Gaza. (length-10 mins)
Meal now fully booked. 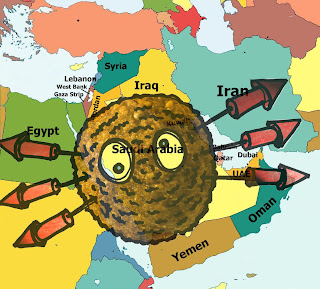 “What distinguishes the case of falafel from those of rice and wine is our access to its historical origins. Falafel was not assimilated into Israeli society by a long, slow, natural process. Rather, its transformation into an icon of Israeli culture was rushed and deliberate. In its urgent search for symbols of unity, the nationalist movement hit upon falafel as a signifier of Israeli pride.”

Quote from: Falafel, A National Icon, Yael Raviv, Caliber, Journal of The University of California Press, published in Gastromonica, Summer 2003, Vol. 3, No. 3, Pages 20–25